The Gramophone Trophy Of The Grammy Awards

The Gramophone Trophy Of The Grammy Awards 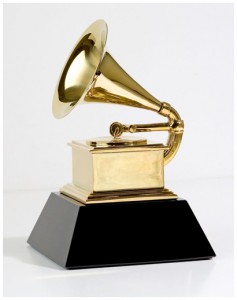 Originally known as the Gramophone Awards, the Grammy Awards takes place this year on Febraury 10th.  If you have ever watched the awards, you would probably recognize the Gramophone trophy award. It’s eloquent design makes it stand out and easy to recognize.

We here at Toronto Gold did a little research and found some interesting tidbits that we’d like to share regarding the history of the Grammy Awards, and specifically the production of this gold-plated trophy.

The Grammys first began in 1958 when the National Academy of Recording Arts and Sciences decided to present awards to the top performances in the music industry. This marked the beginning of the Grammy’s as we know it.

When trying to decide what the award should be called, the name Eddie Awards (after Thomas Edison, inventor of the phonograph) was one possible choice. However, they decided to go with Gramophone Awards after the gramophone that was invented by Emile Berliner. The Grammy Awards Trophy is fashioned after the gramophone.

Meet John Billings, the “Grammy Dude”. John is the owner of Billings Artworks, the Colorado company that produces the Gramophone trophies. The process hasn’t changed much since the trophy’s first production. As such, it is a very complicated and time consuming process, because it’s all done by hand. With the help of his son “little John” and longtime friend Jim Spear, John Billings crafts each Gramophone by hand – spinning, shaping, filing, grinding, buffing and polishing to make sure that each one is built to perfection. Initially, the trophies were build using lead which proved problematic as trophies began to break. So they made a small change in the metal used to construct the trophies.

Today, each horn is made up of gorgeous spun brass. Each tone arm, base cast and cabinet is made from a unique alloy called grammium. Grammium is a trademarked zinc and aluminum metal alloy that was developed specifically for the Gramophone Award. After the trophies are cast in grammium, they are plated in 24-karat gold for a final touch, giving it the rich glow that radiates throughout the ceremony.

According to the Recording Academy, each Gramophone trophy weighs 5lbs 4ozs and stands 9 inches tall. The melt value of the Grammy trophy would be hard to determine since Grammium is a unique alloy, and contains no precious metals.