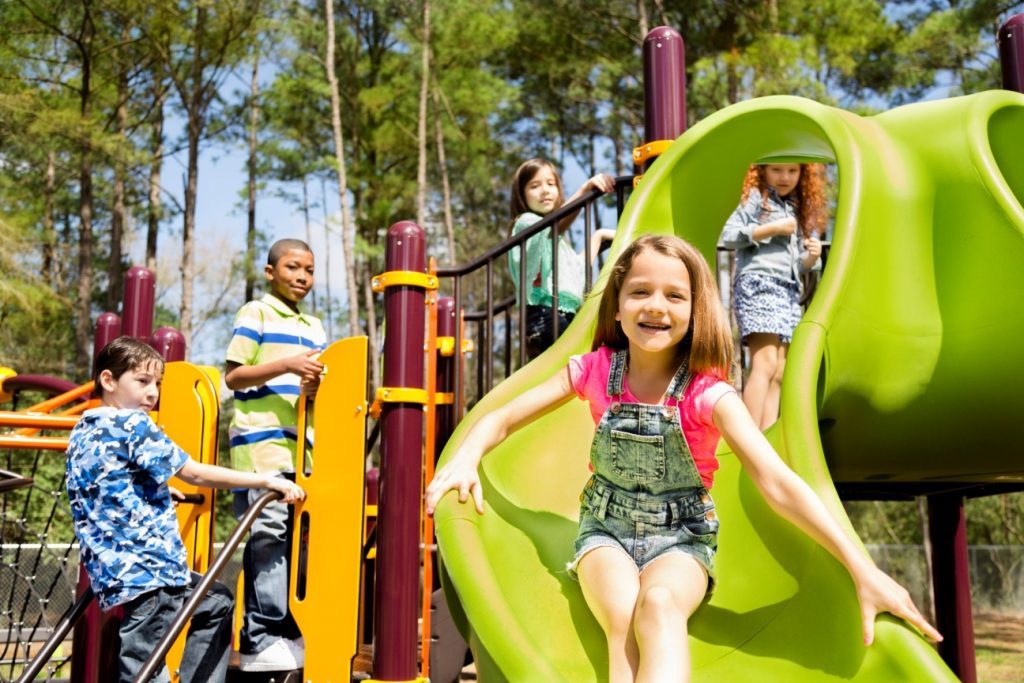 It’s always a great time to be in Toronto during the summer, but if you’re a parent, you’re probably going to have your hands full once school gets out. Fortunately, the city has many great parks and playgrounds to help keep you and your kids busy. The best playgrounds are the ones that capture imaginations, offer many things to do, while also giving children a fun, physical challenge. As luck would have it, Toronto has plenty! Here are the top 10 parks and playgrounds in Toronto: 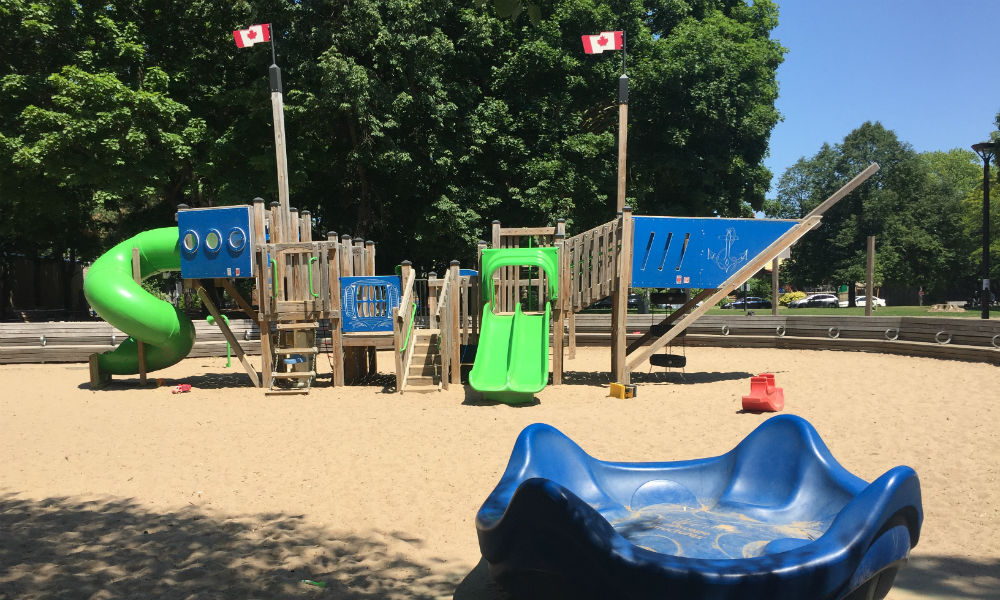 The Vermont Square Park is a 1.5 hectare park located near Dupont and Bathurst. It features the Dennis Lee Playground, which is probably one of the more interestingly designed playgrounds in Toronto. Well inside the park, surrounded completely by a large sand pit and lined with slides and ladders, is a pirate ship-themed jungle gym! If you have energetic children who have an active imagination, this place will certainly keep them busy! Outside of the playground, there is also a wading pool, an off-leash dog park and two bocce pits for grown-ups to enjoy! 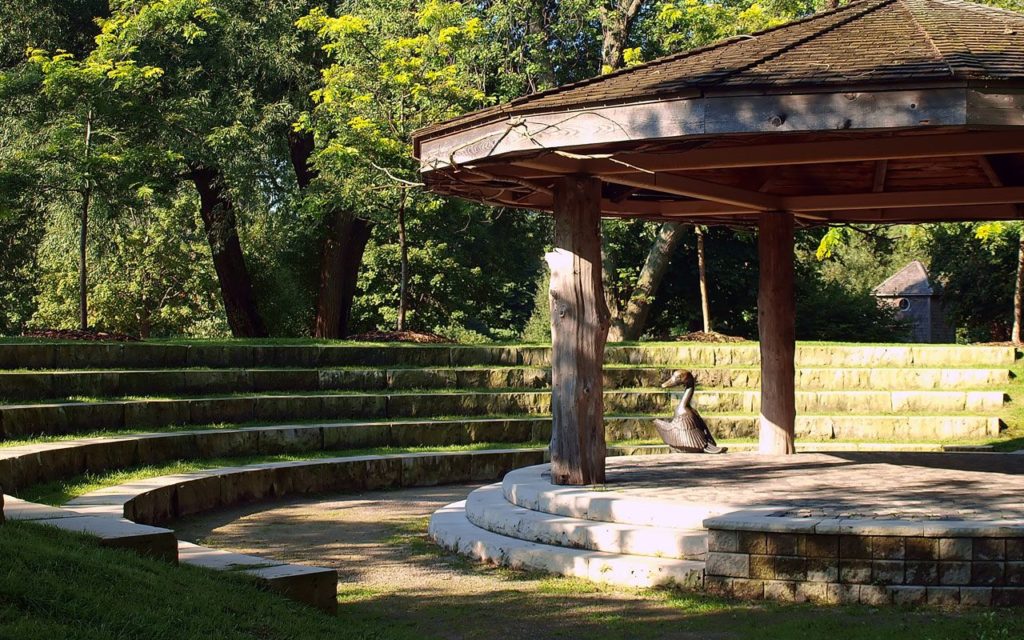 Toronto Island features some of the most breathtaking views of the city’s skyline and is also home to some of the best playgrounds. The entire park is dotted with many swing sets, jungle gyms and sand pits that will literally take an entire day to explore. Some highlights include the Franklin’s Children Garden – a greenery and flower garden for kids, as well as the Centreville Amusement Park. There are also plenty of beaches and outdoor picnic areas where you can simply lounge around. If you’re feeling more active, you can even rent a bike or a paddleboat and just take it easy! 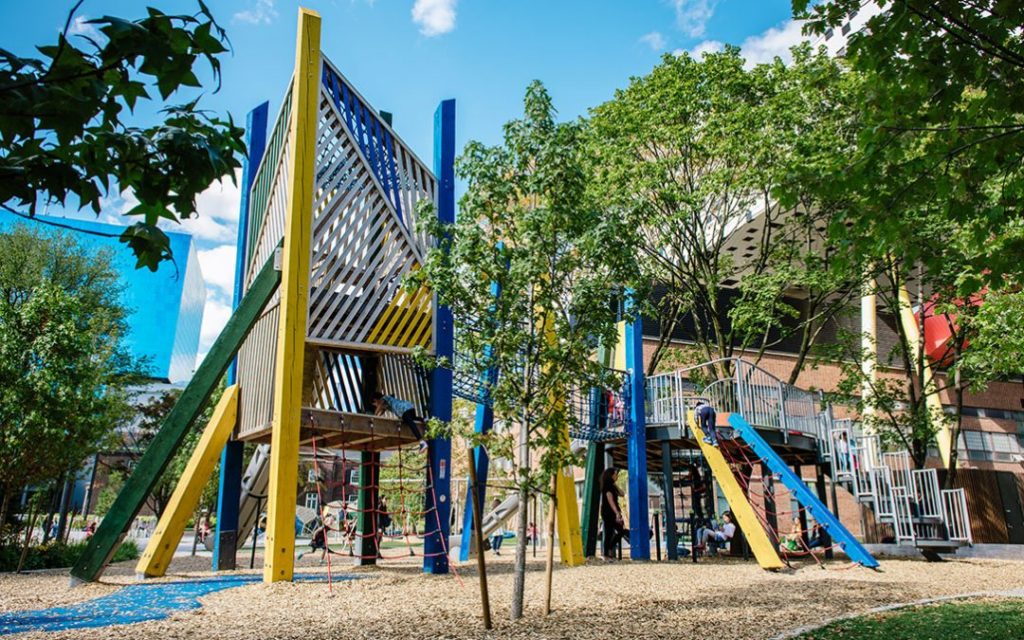 As one of the newest parks in the city, Grange Park finds its home in one of Toronto’s trendiest areas. Conveniently located near OCAD and the AGO, the playground in Grange Park pays homage to its artistic neighbors by having a jungle gym that’s practically a modern art sculpture. The design features many angular, hexagonal shapes that are linked by challenging rope ladders and bridges. Besides that, there is also an off-leash area for dogs, as well as a splash pad for hotter days. This playground is sure to captivate children with both active and creative sides! 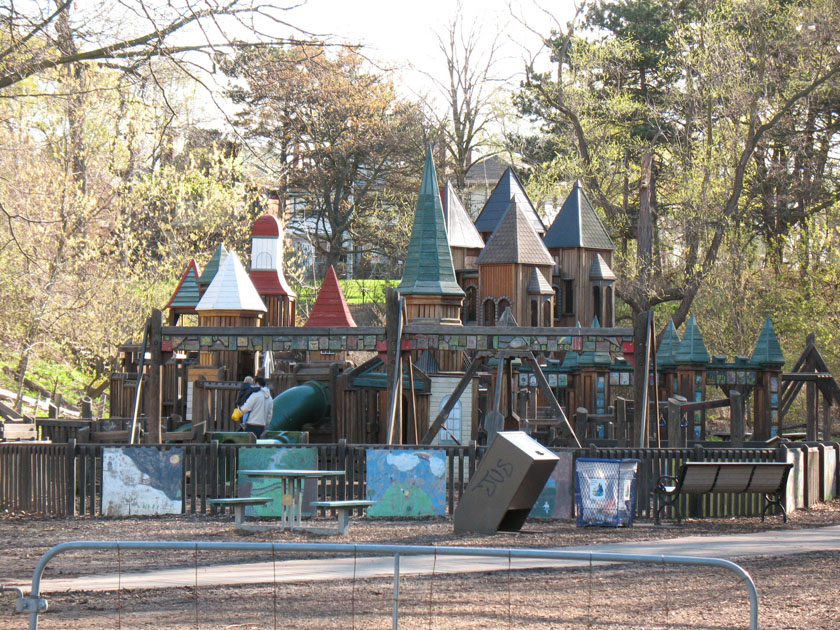 As the largest and one of the oldest parks in Toronto, High Park certainly has much to show off. Among the many attractions this park has to offer is the Jamie Bell Adventure Park, a massive playground that’s designed like an elaborate medieval castle! The playground was rebuilt in 2012 after a devastating fire destroyed the one before it. The reconstruction effort was spearheaded by celebrity home contractor Mike Holmes, along with hundreds of volunteers, who wanted a place for children to stretch the limits of their imagination. As a testament to their vision, the park also features a sculpture of “A Sword in the Stone” – a nod to the legendary Excalibur!

Unlike other parks on this list, Earlscourt Park is much smaller and simpler. However, its lack in size is made up for its natural serenity and its surprisingly large number of facilities. While the park has a standard sand pit and jungle gym, it also features a multipurpose field, a basketball court and a baseball diamond. There is also a small wading pool in the park, while the larger Giovanni Caboto pool is only steps away. The latter is even equipped with a large water slide that’s fun for all ages! 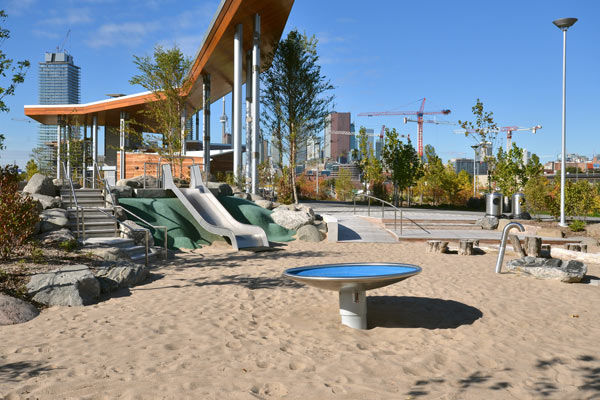 Corktown Common is a massive 7.3 hectare park that was built along the Don River in 2014. Given its proximity to such a natural environment, its not surprising to see all kinds of small wildlife there. The park features a uniquely designed playground that’s inspired by its natural roots. There are slides that are evocative of flowing creeks, as well as sandpits that are designed to look like ponds and lakes. There are also plenty of swings, balance sets and even a splash pad. Outside of the playground, the park is interlaced with many walking trails that will let you experience the natural sights of the surrounding area. 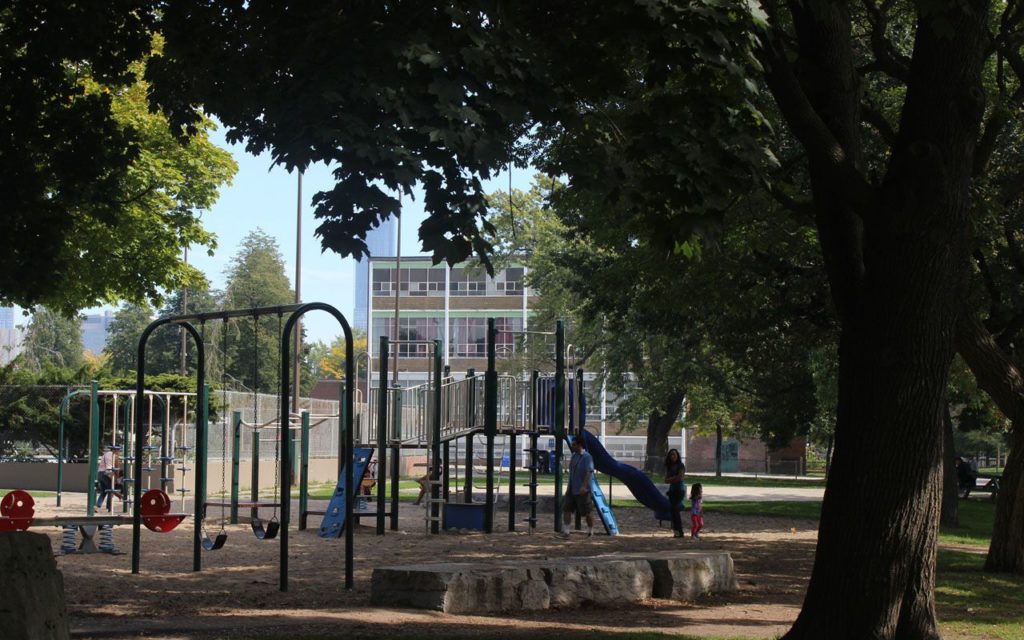 Alexandra Park is a great place for families, especially those with older kids.  While the area sports a standard jungle gym with slides, swing sets and monkey bars, the park also has a skateboard area, a volleyball court, a community garden and even an outdoor curling rink that’s open in the winter! For this summer though, be sure to take advantage of the nearby outdoor pool, as well as the park’s brand new splash pad!

Located near the beaches area of Toronto, Kew Gardens is home to some of the most beautiful sights in the city. The park itself sports some impressive features as well, including an elaborate, castle-themed playground as well as a grand wading pool that’s comparable in size to some small swimming pools! If all this doesn’t wear your children out, you can always take them on a nearby nature trail or on a historical walk to check out some of the oldest buildings in the city! 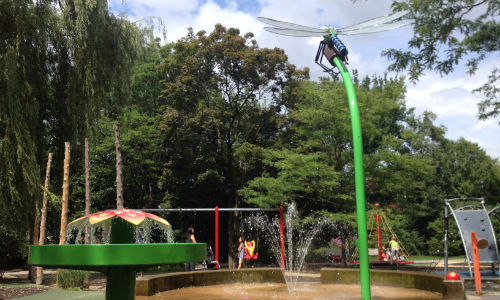 Oriole Park is a large 2.9 hectare park that’s known for its green landscape and relaxing atmosphere. The park’s playground is a practical obstacle course that’s laden with monkey bars, climbing ropes, slides, seesaws and swings. On top of that, the park also has a clubhouse, a baseball diamond, a sand pit, a wading pool and two tennis courts. However, what really makes Oriole Park stand out is its elaborate splash pad, which is designed to evocate a green pond. The site is adorned with sculptures of a lily pad, frogs and even a giant dragonfly!

St. James Park is another park with a uniquely designed playground. Located near the iconic St. Lawrence Market in downtown Toronto, the playground gathers inspiration from its neighbour by incorporating food and colour into its surrounding play structures. Within the large playground are beautifully designed sculptures of asparagus, carrots and even a spilled ice cream cone. The playground offers many places for kids to climb and also sports a rope bridge and a merry-go-round. With so much to do and see, this will definitely keep your kids’ attentions!