Have you ever wondered what professional sports trophies are worth? We here at Toronto Gold understand that these trophies are priceless considering the blood, sweat and tears that it takes to win one of them. However, there is another way to determine each trophy’s value.

These prized possessions are made of precious metals, usually sterling silver and gold, which means they can be assigned a melt value – an attractive one at that! The perceived value of these trophies is no more than an estimation of what you’d get if you sold the trophy privately to the highest bidder.

Check out what we found: 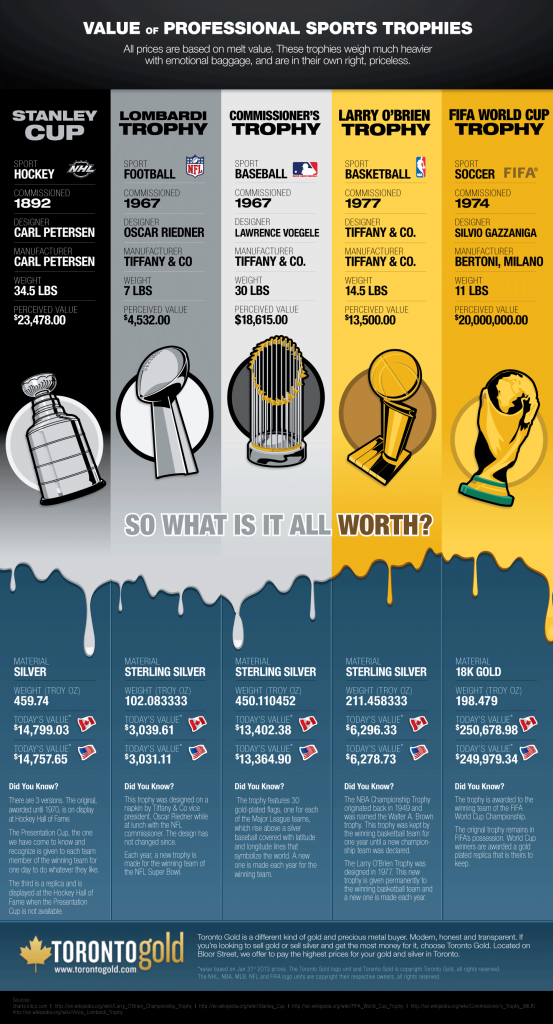 The Stanley Cup is named after Lord Stanley of Preston, the then Governor General of Canada. “The Cup” is the most legendary and revered trophy in modern professional sports. It has undergone several changes since its inception in 1892, the most prominent in 1958 when layers were added whereupon the names of all the players, coaches, management and club staff are engraved forever.

Also referred to as the “Tiffany Trophy,” the Vince Lombardi Trophy stands at 22 inches tall and depicts a football atop a three sided stand made of solid sterling silver. Engraved on the trophy are the words “Vince Lombardi Trophy” and the roman numerals of that year’s Super Bowl. After the completion of the game, the trophy is sent back to Tiffany & Co. to have the team names, the final score of the game, date and location engraved on it for the team to keep forever. The trophy is named after legendary Green Bay Packers coach, Vince Lombardi, who died suddenly from cancer.

The Commissioner’s Trophy features a unique design that sets it apart from all other professional sports trophies. Unlike the other four major sports trophies in the U.S., this trophy does not have a proper name associated with it. The Commissioner’s Trophy is presented by the Commissioner of Baseball to the winning team of the World Series. It stands at 24 inches tall and is 11 inches in diameter. It’s symbolism and unique construction make it a gorgeous spectacle.

The FIFA World Cup Trophy as we know it originated in 1974. The trophy stands at 14.5 inches tall and depicts two human figures holding up the world. Contrary to popular assumption, the trophy is actually hollow. Since the trophy is made of 18kt gold, it would be too heavy to lift if it were solid gold through and through!

Prior to the creation of the FIFA World Cup Trophy, another trophy was used to award the winning team of the World Cup, known as the Jules Rimet Trophy. It was used from 1930-1970 and was named after the FIFA president who initiated the World Cup competition in 1929. Brazil was the last team to be awarded the Jules Rimet Trophy (winning it outright), but tragedy struck when it was stolen in 1983 in the city of Rio de Janeiro and never recovered.

The Sprint Cup title is awarded to the driver with the most points after the Chase for the Sprint Cup. Traditionally, the driver, the team and the primary sponsor each get their own trophy. The first driver awarded the trophy was Kurt Busch in 2004. A new one is made each year so that the winning driver maintains permanent possession of their trophy.

The Kentucky Derby Trophy is the only solid gold trophy that is annually awarded for a major American sporting event! It stands at 22 inches tall and is decorative and elaborate, showcasing a golden horseshoe on the front. The owner receives the gold trophy while the trainer, jockey and breeder win a silver half-size replica of the main gold trophy.

Standing at a height of 28 inches and a width of 27 inches, the Wanamaker Trophy is the biggest/heaviest trophy awarded to professional golfers who play on the PGA Tour. The trophy was created by and named after Lewis Rodman Wanamaker, a patron of the arts, education, aviation, athletics and above all, golf. Wanamaker helped found the Professional Golfers’ Association of America (PGA) and hosted the first all-professional tournament in 1916. The original Wanamaker Trophy is on display at the PGA Historical Center in Port St. Lucie, FL. Replicas are made each year and awarded to the winner of the PGA Championship.

The Steinfeld Cup is the holy grail, so to speak, for lacrosse players. Standing at 3 feet tall, it is one of the largest trophies awarded in professional sports. The trophy is named after MLL founder Jake Steinfeld who founded the league in 1999. A new trophy is made each year to be awarded to the winning team of the New Balance Major League Lacrosse Championship.

Similar to the Stanley Cup, the names of the winning team’s players and executives are engraved onto the silver trophy. Also, members of the winning team are allowed to take the trophy home to celebrate their win. After a series of accidents and mishaps involving the Grey Cup, the Canadian Football League commissioned a replica of the trophy in 2008. Information on the Grey Cup is limited.